MICHAEL ROSE ORCHESTRA WITH STRINGS PERFORMS FOR THE TRUMPS!

Thank you so much for making our wedding night so magical. Your orchestra is breathtaking. Your performance exceeded our expectations in every way. We will never forget the beautiful sounds of the MICHAEL ROSE ORCHESTRA. MELANIA AND DONALD TRUMP in a letter to Michael Rose dated January 31, 2005

The wedding of Melania and Donald Trump, held in the Grand Ballroom of the Trump’s palatial Palm Beach home and private club, Mar-A-Lago, was the most sumptuous affair in recent history.  It has been dubbed the “Wedding of the 21st Century.” 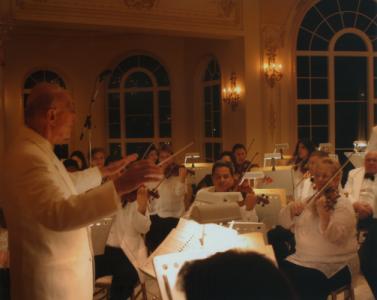 Michael Rose leads the orchestra at the wedding of Melania and Donald Trump.

The Michael Rose Orchestra with strings is proud to have been chosen to provide music for this grand event.  The three hour wedding program, designed especially for Melania Trump, included the works of Bach, Handel, Mozart, Chopin, Johann Strauss, and a Love Medley of America’s greatest composers, Jerome Kern, George Gershwin, Rodgers and Hart, etc.  As the 400 celebrity guests entered the castle, they were greeted by five serenading violinists at the steps of the famous vaulted ceiling and gold encrusted living room.  In the lavish new ballroom, modeled after the Versailles Palace, a 40 piece orchestra entertained the guests.  The 36 strings, piano, drums, saxophone, and trombone, were conducted personally by renowned orchestra leader, Michael Rose.  The wedding couple entered to the strains of Camellia Johnson, Metropolitan Opera Soprano, singing the dramatic Puccini aria from Turandot, “Nessun Dorma.”  Later, a smaller contingent within the orchestra accompanied Billy Joel, Tony Bennett and Paul Anka in their performances honoring the famous couple.

The Michael Rose Orchestra looks forward to yet another year of magnificent galas and important weddings, at Mar-A-Lago and other grand locations throughout South Florida.

A RETURN TO THE BIG-BAND ERA: (an excerpt from “The Elegant Wedding and the Budget-Savvy Bride” by Deborah McCoy, noted wedding consultant and owner of “Elva’s for the Bride,” a large full service bridal salon in Boca Raton, Florida)

“When Michael Rose began his orchestra, it was not considered to be a wedding band; nor was his type of music fashionable for receptions.  People preferred bands that played popular music.  But a few years ago all that changed.  While entertaining at a prestigious hotel in South Florida, younger people began approaching him for information.  Their reasoning: They wanted something different, different from the typical rock bands that had become the norm.  They wanted something exceptional for their reception, but not as loud.  And they also wanted music to please their parents.  His wedding business took off!  Michael attributes this revival to a generation who appreciates the likes of Cole Porter and George Gershwin, a generation who’s come to understand classic American music.”