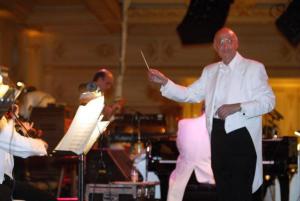 A decade ago, the real estate mogul-turned TV personality first booked the soft-spoken, bespectacled conductor for a New Year’s Eve party to entertain the rich and famous at the Palm Beach landmark.

Today, the Michael Rose Orchestra, which prides itself on rekindling the romance of America’s swing era, is a favorite on the Palm Beach society circuit.

Not bad for a newcomer who arrived in South Florida in 1988.

“I was a nobody but with good credentials,” says Rose, 68, of Stuart.

Last month, the Michael Rose Orchestra gained national attention — and a jewel of a reference — as Donald and Melania Trump’s choice of entertainment at the Mar-a-Lago Club for their lavish wedding reception.

Even Rose was surprised by the outcome.

“I’ve been in the business for 50 years,” Rose says. “This exposure was almost like being an overnight discovery. We just got a call to do one of the largest galas in Texas.”

“All of a sudden, we were hit with a barrage of celebrities — Tony Bennett, Vic Damone, Billy Joel,” Rose says. “I was on stage and someone was pulling my trouser leg. I looked down, and there’s Paul Anka asking me, ‘Can you play My Way in the key of C?’ ”

A week after the wedding, Rose received a handshake from Trump himself as well as a personal letter from the newlyweds. It reads in part:

“Thank you so much for making our wedding night so magical. Your orchestra is breathtaking. Your performance exceeded our expectations in every way. We will never forget the beautiful sounds of the Michael Rose Orchestra.”

Rose and his wife, Sandra, both Long Island natives, have been married for 45 years. For 26 years, Rose was a music director for one of Long Island’s school districts, while playing at the legendary Copacabana and other New York night clubs. In the mid-1980s, he toured in Europe with a ghost band for Glenn Miller.

While their daughter attended the University of Florida, Sandra Rose toured the state’s east coast on spring break and liked what she saw. Soon, the couple made Boca Raton their home, and Rose was freelancing as a musician.

In 1990, the Michael Rose Orchestra was launched as a family-owned business. He’s the talent. She’s his business manager. Sandra handles everything from promotions and publicity to booking the orchestra dates and contract negotiations.

“It’s so much easier with just me and him,” she says. “There’s no middleman. We don’t have to wait for somebody else to make a decision.”

Last month, the Trumps’ wedding reception shared a busy calendar of prominent engagements in Palm Beach, including a charity gala at The Breakers with Al Martino and Mary Tyler Moore, a private party featuring Frank Sinatra Jr. and the International Red Cross Ball with Neil Sedaka at Mar-a-Lago.

Rose attributes his orchestra’s meteoric rise to its niche — matching the standards of the big band greats. His musicians play the same arrangements as the original artists.

“My library has arrangements from every one of those bands, and we duplicate them exactly as they are — note for note,” says Rose.

Four years ago, the orchestra added a vocal group, The Rosebuds, to resurrect the hits of Rosemary Clooney, the Mills Brothers, Frank Sinatra, Doris Day, Peggy Lee and Sarah Vaughan.

More exposure came from a television special for WXEL-Channel 42. For eight years, the Michael Rose Orchestra has been the station’s resident orchestra and is heard on PBS and NPR stations serving Palm Beach County and the Treasure Coast.

There are also six CDs, including Rose Colored Classics and Michael Rose Live at WXEL.

Meanwhile, Rose is passionate in his mission to perpetuate the famous bands of the Swing era for generations to come.

“Give me a rock ‘n’ roll song that’s as sophisticated and clever as George Gershwin’s “Our love is here to stay” or Cole Porter’s “I get no kick from champagne,” Rose says. “It’s the difference between reading a Hemingway novel or a comic book. It’s that simple.”